Thoughts on The New Yonex Nanoflare 800 (4U) – Racquet Review

The Difference Between Street Brakes and Racing Brakes | Articles

The brakes for both the road and race versions of the latest Ford GT are supplied by the same company, but their specs vary. Greatly.

The street car’s brakes must perform at a high level while also remaining civil—no noise, no discomfort. The ones on the race car have a narrower purpose: to help win races. Both operate on the simple premise of converting kinetic energy into heat, but parsing how each one meets its specific engineering challenges is a deeper dive than you might imagine.

Even a machine as exotic as the latest Ford GT—the brand’s half-million-dollar, 660-horsepower supercar—is still primarily designed for street use. It’s fast, yes, “but 99% of the time, it is a road car,” notes Benjamin Pohl, Brembo North America’s senior program manager for original equipment. “Noise, wear, dust: Consumers care a lot about those things.”

How the brakes feel is also very important to the end user, he continues: “They don’t want to feel brake judder on their drive to work.”

At the same time, these brakes must be able to handle track use that Pohl characterizes as short-duration, limited and nonprofessional—basically a track day, with drivers tapping maybe 80% of the car’s capability.

2. Piston Size
Both the race and street brake calipers feature six pistons up front and four pistons out back. Piston size differs, though. Federal regulations state that, should the power assist fail, the street car still must slow at a certain rate at a certain pedal pressure. That typically dictates larger pistons.

3. Anti-Rattle Clips
The street calipers get anti-rattle clips to keep things quieter and control the retraction of the pad.

4. Caliper Life
A street caliper is designed to deliver hundreds of thousands of cycles over years of service, in some cases the entire life of the vehicle. “That might drive a caliper to be heavier,” Pohl says. In this case, a cast-aluminum caliper met the cost and operational goals.

8. Friction Material
The pads must operate under a wide range of temperatures while remaining quiet, civil and relatively dust-free. Federal standards are currently phasing out copper and other heavy metals from brake pads.

9. Weight
A fully loaded, cast-aluminum front caliper for the street Ford GT weighs about 16 pounds. “Racing guys have the opportunity to remove weight where we can’t,” says Pohl.

10. Cooling
The road car is one of the few street models delivered from the factory with caliper ducts.

11. Cost
Ford initially promised to build 1000 copies of the Ford GT over four model years. “Even 250 units per year, that’s a lot of units,” explains Pohl. “We have to design a caliper for high-volume manufacturing.”

Brake Issues?
“Nine times out of 10, it comes back to cooling,” explains Mike Messina, manager of racing at Brembo North America. “Take whatever you think you need and double it.”

The factory-backed Ford GT race effort landed with a splash, winning big at its Le Mans debut in 2016 as part of a 1-3-4 finish. Then the success came stateside, with class wins at Daytona for 2017 and 2018.

“We have more freedom to make exactly what is needed for the intended use,” explains Mike Messina, manager of racing at Brembo North America. “In some ways it’s easier. I don’t have to worry about how loud it is.”

Brembo’s only mission when creating the brakes for the race car? Winning races. Any other concern, including cost, was secondary. Messina used a tire analogy to explain these brakes: “We’re making racing slicks.” 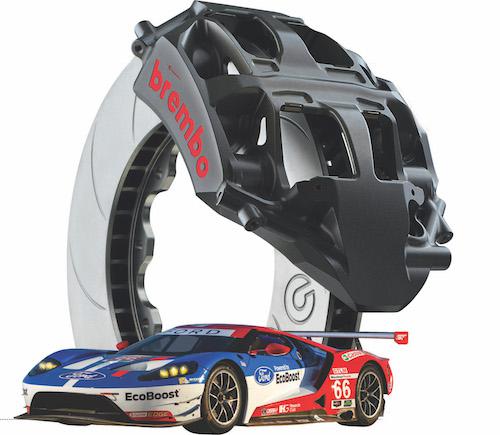 1. Pad Life
The front calipers are built around 30mm-thick pads, enough material for 18 to 20 hours at Daytona. Some teams have run all 24 hours at Le Mans on a single set of pads. “I don’t recommend it,” says Messina, “but it’s been done.” Each 1mm in pad width requires 2mm in caliper width. “All of this adds up,” Messina continues, noting that a race caliper can wind up being considerably wider than its road-going counterpart.

3. Anti-Rattle Clips
The race car doesn’t get these.

5. Caliper Seals
The street car’s accordion seals would melt under competition conditions, so the race calipers just get a primary seal.

8. Friction Material
On track, the brakes operate within a narrow temperature window and don’t need to bother with street manners. “The race car can be so much more focused on a narrow range of operations,” says Messina. “Most race pads don’t wake up until 300 degrees Celsius.”

9. Weight
Thanks to the five-axis machining work, which adds to the manufacturing cost, the front calipers for the race version of the Ford GT weigh 7.25 pounds.

10. Cooling
“So much attention paid to cooling on the road car helped the race car,” explains Messina. “In the case of the Ford, it was a pretty straight shot. All we had to do was adapt what was there on the road car.”

11. Cost
Brembo says that the race caliper would retail for three to five times as much as the street caliper.

Like what you’re reading? We rely on your financial support. For as little as $3, you can support Grassroots Motorsports by becoming a Patron today.

Ford GT at a track day, you must be kidding. Only if it was enclosed in a plastic bubble with land mines around it. Ford could have fudged on the engineering since none of these things actually get driven. These are strictly investment grade jewelry. That said, I love them and the GT40 before them.

Interesting article, thanks.  I think that racing practice has improved street brakes in many cases. If Jaguar hadn’t been running Le Mans they probably wouldn’t have gone to discs as early as they did.

There are many cars made with perfectly adequate braking systems  but owners insist on changing them out for something larger, more colourful and most important fo many, praiseworthy in the eyes of their peers when nothing was needed  Some of them try and rationalize it by starting with older half thrashed ill maintained stock systems that they toss out and install new big brake kits and say that the huge difference proves they needed them, despite the fact that in many cases if they had first maintained their stock system and chosen optimal pads, there would have been little difference in the end result.

Nothing at all wrong with fitting stuff to your car for no other reason than you think it is neat – big brakes, alloy wheels etc. etc.  Not sure what the deal with the self deluding need to justify that sort of mod as being a safety necessity is all about.

In the old days, there were a bunch of cars manufactured with crap braking systems – take a look at the first discs used on the front of a Cooper S (I laugh every time I see one) or the rotors they had in the Tiger (wonder who said ‘Why don’t we make a pocket Cobra out of an Alpine by sticking a V8 in it, but lets stick with 13″ wheels so we can’t fit a competent brake in there for anyone that actually drives hard”)

There are many cars made with perfectly adequate braking systems  but owners insist on changing them out for something larger, more colourful and most important fo many, praiseworthy in the eyes of their peers when nothing was needed

Agree.  I think you just summed up a wide swath of the aftermarket industry these days, not just brakes.

There are many cars made with perfectly adequate braking systems  but owners insist on changing them out for something larger, more colourful and most important fo many, praiseworthy in the eyes of their peers when nothing was needed

Agree.  I think you just summed up a wide swath of the aftermarket industry these days, not just brakes.

Brakes are the #1 issue by a wide margin though, so many people think they need more braking power when they really just need more brake heat capacity/brake cooling. Fancy brake upgrades are a great way to end up with increased unsprung weight and/or a severely lightened wallet (up-front and ongoing, hello race-grade consumables!), while more aggressive pads, good fluid and a cheap brake vent system on a factory all-around disc setup can do the job just as well on most any car that retailed for under 6 digits in the first place.

I’ve been building and racing an old Mercedes 16-valve for some 10 years now. So, I’m one of the few guys with real-world experience driving this platform pretty hard on the track. I’ve done ok for myself considering my modest skill and budget (regional champion twice; national champion this year).

There’s a growing interest in tracking the 16-valve with a bunch of builds starting on various forums and FB groups. Every single one is obsessed with brake upgrades: 400E 4-pistons, 500E Brembos, Porsche kits, and others. Every thread is “which big brakes do I need for XYZ application” etc.

Meanwhile, I’m here quietly collecting class wins on stock single-piston sliding calipers with just upgraded pads (Raybestos ST-43) and fluid (Prospeed RS683). That setup lets me use lighter, cheaper 15″ wheels and tires instead of “upgrading” to 17″ for no reason. No one seems to believe this is possible. 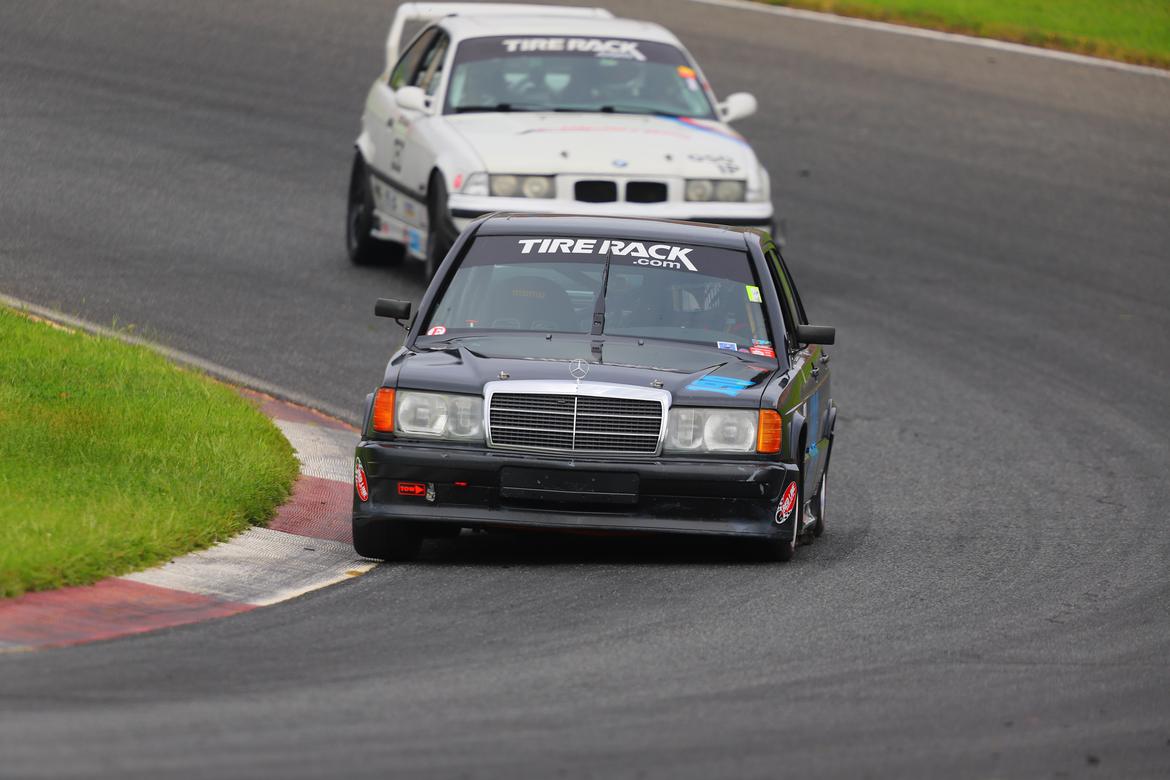 Glad you all enjoyed the piece. It was informative to put together.

How does the title fight look after Bagnaia’s Motegi crash?